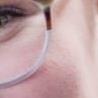 Benchtop testing is typically performed under baseline and simulated use conditions. Baseline testing characterizes particles generated from the device, while simulated use testing analyzes particles due to simulated tracking to the target site and due to device deployment. The continuous flow loop for capturing the particulate matter has been previously described.

For baseline testing, a beaker and funnel are cleaned in an ultrasonic cleaner and rinsed with particle-free water prior to testing inside a laminar flow cabinet. A primed gold filter is mounted to the funnel base, and vacuum pulls the media through the filter. The beaker is filled with particle-free water, the device is deployed into the beaker, and the test media is poured into the funnel for filtration. The gold filter is removed from the funnel base and analyzed in an SEM for particle count and morphology.

For simulated use testing, the device and deployment system are tracked through an in vitro model simulating the vascular anatomy (shown above), and then the device, a stent in this case, is deployed with a balloon catheter into a mock vessel. The flow loop is maintained at a pre-specified flow rate for several minutes, and new mock vessels are used for each test repeat.

The total cumulative number of particulates released from the scaffold is measured using SEM with Automatic Feature Analysis (AFA) software. Particulate matter is characterized by diameter size into at least three bin sizes: 10 to 25µm, 25 to 50 µm, and ≥50µm. Scaffolds are also inspected post-testing for any defects or anomalies.