The Importance of Synthetic Nicotine Testing for ENDS, Vape and Smokeless Tobacco Products

Two sources of nicotine, natural nicotine, obtained from a plant source (by and large from tobacco plants), and synthetic nicotine, which is produced via chemical synthesis, are being incorporated into vape and smokeless tobacco products.

Synthetic nicotine, also known as tobacco-free nicotine (TFN), is synthesized using an assortment of chemicals including sulfuric acid, niacin and ethanol. The distinction between natural and synthetic nicotine is critically important within the vaping industry, as the definition of nicotine, which includes its source, has a direct correlation to the oversight, or lack thereof, of the US Food and Drug Administration (FDA) for e-liquids and electronic nicotine delivery systems (ENDS).

It is worth noting there is speculation that the FDA may potentially regulate synthetic nicotine as a drug under the FDCA, but to do so, the Agency must be able to demonstrate that the product is “intended for use in the diagnosis, cure, mitigation, treatment, or prevention of disease” or “intended to affect the structure or any function of the body…” In the event that the FDA were able to regulate synthetic nicotine products as drugs, the Agency would be able to regulate products containing synthetic nicotine products similarly to the way in which the FDA currently handles natural, tobacco-derived nicotine products. Currently, when nicotine serves a therapeutic use, it is considered to be a pharmaceutical, and therefore is regulated by the FDA accordingly. An example of this is the use of nicotine in smoking cessation products (e.g., nicotine patches).

The benefits and disadvantages of synthetic nicotine

Finished nicotine, smokeless tobacco, vape and ENDS products on the market, as well as the raw materials used in the creation of those products, can be analyzed to determine whether the nicotine contained within the product has been derived from a synthetic source. There appears to be a consensus as to which analytical tests are needed to confirm whether nicotine is synthetic or naturally derived, including:

Additional confirmatory analyses may be pursued by scientists, including the use of chiral HPLC to separate the R- and S-stereo isomers within the nicotine with a chiral column. Once separated, the relative amounts of each isomer can be detected, and a determination can be made as to whether the nicotine being analyzed is naturally derived or synthetic.

Testing of nicotine for the presence of tobacco specific nitrosamines (TSNAs)

When nicotine-containing products and/or the nicotine itself is analyzed by a validated method for TSNAs, the confirmed absence or presence of TSNAs, in combination with the results of optical rotation testing, can verify whether nicotine has been derived from a natural source or chemical synthesis.

Even though purity testing is not a requirement when determining whether nicotine is synthetic or natural, an understanding of the purity of nicotine can provide important insight as to the composition and quality of a product. The American e-Liquid Manufacturing Standards Association (AEMSA) calls for the incorporation of US Pharmacopeia (USP) grade nicotine in their e-liquid products. USP specifications of nicotine purity allow for a maximum of 0.5% (5 mg/g) of a single impurity and 1.0% (10 mg/g) total impurities. Although these standards are widely accepted within the industry, it is important to note that the AEMSA possesses no regulatory authority.

Nicotine compounds are extracted from tobacco plants by means of a rigorous process that relies upon several chemicals, solvents, and extractions. Alternatively, a multi-step synthetic manufacturing protocol is followed to create synthetic nicotine, building upon ethyl nicotinate which serves as a backbone that different compounds of low or moderate toxicity are added to as a result of various chemical reactions. Due to the way in which it is synthesized and manufactured, synthetic nicotine has limited impurities and can be scaled without the needs of farms, crops, or extraction processes.

Multiple factors must be considered when choosing the right lab to partner with for nicotine product testing, including whether that lab is FDA-registered. While not all labs that perform nicotine testing are registered with the FDA, all tobacco products are regulated by the FDA, including products which contain naturally derived nicotine. Element’s consultative team of scientists is standing by ready to support your nicotine testing needs in our purpose-built, FDA-registered lab. Our scientists will act as a true extension of your team, providing industry-leading insight and perspective, as well as access to a wealth of scientific and legal knowledge. Our approach is customized to each individual customer and their needs, providing fit-for-purpose solutions.

Learn about the three phases of FDA PMTA deficiency letters and how to format responses properly. 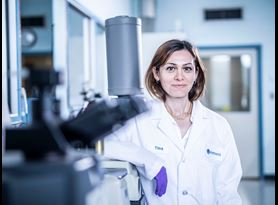