Controlling Dangerous Mycotoxins and Other Microbial Contaminants in Nicotine Products

Particularly dangerous microbial toxins which pose a risk of long-term damage to the health of consumers in both small and large doses have been found recently in a variety of nicotine products readily available in the marketplace. The toxins that have been found in these products include mycotoxins as well as a variety of other microbial contaminants.

This article will discuss the impact of mycotoxins and other microbial contaminants found in nicotine-containing products, including e-cigarettes, smokeless tobacco products (e.g., gums, lozenges, and other novel nicotine delivery systems), and electronic delivery systems (ENDS). Additionally, the nature of microbial and bacterial contaminants will be considered, as well as what measures developers and manufacturers of nicotine-containing products can take to control these potentially toxic contaminants.

According to the World Health Organization (WHO), mycotoxins are naturally occurring toxins which are produced by specific molds. While mycotoxins are most commonly detected in foodstuffs, they have also been found in other products and goods made from agriculturally derived materials. Both before and after harvest, the molds responsible for the production of mycotoxins can grow on a variety of crops including nuts, spices, dried fruits, coffee beans, tobacco leaves, and the like. The molds that produce mycotoxins and other dangerous microbial contaminants thrive in warm and humid conditions. Mold growth has been observed in and on crop yields and or stored foodstuffs when environmental conditions are warm, damp, or humid.

While hundreds of different mycotoxins have been identified, the most commonly identified mycotoxins which present a considerable risk to human health when consumers are exposed to them include aflatoxins, ochratoxin A, patulin, fumonisins, zearalenone, and nivalenol/deoxynivalenol.

The presence of harmful microbial contaminants in agriculturally derived products

Food or agricultural products can be exposed to microorganisms such as bacteria, yeast, mold, fungi, viruses, etc., through various means, including manufacturing, food preparation and cooking methods, or via contact with contaminated surfaces. Unintentional or accidental exposure is often a frequent source of microbial contamination. A common example is undercooking chicken, which can result in the production of campylobacter bacteria.

However, simply cleaning agricultural products sufficient to prevent contamination, as contamination can occur at the beginning of the foodstuff or agricultural product lifecycle with seeds, contaminated water, and even crop handling practices, all of which have the potential to introduce microbial contaminants. Most of the nicotine used in electronic nicotine delivery systems (ENDS), e-liquid, and nicotine-containing smokeless tobacco products is derived from natural sources (i.e., tobacco leaves), which are subject to the same product lifecycle, and therefore are at risk for the same sources of contamination as other agriculturally derived products. The microbial toxins produced by these microorganisms promote infection and disease by directly damaging host tissues and disabling the immune system. Mycotoxins are one of the many types of microbial toxins, in addition to microbial toxins such as aflatoxins, ochratoxins, citrinin, ergot alkaloids, and more.

The effects and dangers of mycotoxins

As previously mentioned, mycotoxins are toxic and present considerable risks to public health. While some symptoms may be minor, several mycotoxins have been linked to negative long-term effects on human health, including multiple types of cancer and immune deficiencies. The aforementioned mycotoxins (aflatoxins, ochratoxins, citrinin, ergot alkaloids, and more) have garnered the most attention due to the severity of the risk they pose to human health.

The most dangerous and poisonous of all the classes of mycotoxins are aflatoxins. The molds that produce these aflatoxins affect crops that are used to in the production of many consumer products, including cereals, oilseeds, spices, tree nuts, and tobacco leaves. Large doses of aflatoxins can lead to aflatoxicosis, a potentially life-threatening acute poisoning that can result in severe liver damage. Furthermore, evidence suggests aflatoxicosis may also cause liver cancer in humans. Kidney damage has been linked to other mycotoxins, including ochratoxin A, and patulin has been noted to cause less severe damage, although ingestion of the mycotoxin has resulted in cases of nausea and gastrointestinal disturbances.

The impact of mycotoxins on nicotine-containing products

Glucan, a microbial toxin, along with endotoxin, was found in a large number of electronic cigarette products sold in the United States. In a study completed by Harvard’s School of Public Health, upon examining 75 popular e-cigarette product cartridges and e-liquids, researchers found that approximately 23 percent of the products analyzed contained traces of endotoxin, while 81 percent of the products contained traces of glucan. As described earlier, exposure to microbial toxins and mycotoxins can cause serious health issues in humans including asthma, inflammation of the lungs, and/or cancer.

The study also found that cartridges were more likely to contain glucan than e-liquids alone. Additionally, the concentration of glucan was significantly higher in tobacco and menthol-flavored products, whereas endotoxin concentrations were higher in fruit-flavored vape products. Upon review of these findings, the consensus appears to be that the raw materials used in the production of flavors may be the primary source of microbial contamination found in the products evaluated throughout the scientific study.

Element’s team of expert scientists have developed and validated analytical methods to analyze e-liquid and vape product matrices for the presence of mycotoxins. The method utilizes liquid chromatography coupled with mass spectrometry to analyze numerous mycotoxins including, but not limited, to fumonisins, aflatoxins, ochratoxins, zearalenone, and nivalenol. Using advanced sample preparation techniques, parts per billion level limits of detection have been achieved, despite the very complex matrices indicative of nicotine-containing products. This is highly important in the nicotine industry, where all products are considered to have very complex matrices which require pre-analysis manipulation to reach levels of detection relevant to consumer daily exposure and consumption. Element’s mycotoxin test methods deliver and provide statistically relevant data for toxicological review which will further determine the toxicity of a finished vape product.

Finding the right lab for mycotoxin testing of vape products

Partnering with the right lab for nicotine testing is incredibly important. With several factors to consider, including FDA registration, experience, and regulatory knowledge, it can be difficult to identify the right lab to partner with. Element’s consultative team of scientists offers clients access to an unparalleled breadth and depth of regulatory knowledge, as well as access to FDA-registered, purpose-built labs. Our team stands ready to partner with you on contamination testing as well as the FDA’s Premarket Tobacco Product Application (PMTA) and other regulatory submissions, including responding to time-sensitive PMTA deficiency letters. 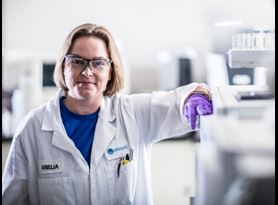 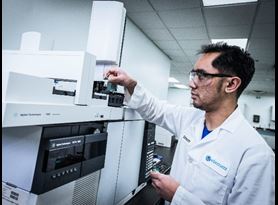 Stay up to date with California Prop 65 testing, compliance and labeling requirements.