We see windows of varying types, in all facets of our life: windshields, building, house windows, and so on. But what are the differences in these materials?

Many types of glass are used in everyday materials. Tempered glass and laminated glass are the most widely used in commercial, residential, and automotive manufacturing. Tempered glass is created by reheating basic glass and rapidly cooling it to cause compression, which leads to a state of internal tension in the material. Tempering the glass makes it about five times stronger than basic glass. This type of glass is typically used in areas where high amounts of stress are applied: entrance doors, sliding glass doors, tabletops and skylights. Its ability to withstand shattering is ideal for these uses. Laminated glass is created by sandwiching two layers of glass with a polyvinyl butyral (PVB) sheet in between. This glass sandwich is then subjected to high heat and pressure, creating a very strong product capable of resisting tremendous force. When force is applied to laminated glass, it does not shatter into a million jagged pieces. Instead, it breaks into pebble-like fragments, decreasing the chance of injury. Automotive glass is composed of both laminated and tempered glass. Windshields are made from laminated, shatterproof glass whereas rear and side windows are made of strong tempered glass.

Why is automotive glass testing important?

Safety is the main reason for automotive glass testing. Element provides automotive glass testing services to help you ensure your product complies with relevant regulations and the highest safety standards, giving you the certainty, you need to get your products to market. We test glazing materials used in motor vehicles against the requirements of ANSI Z26.1, the Federal Motor Vehicle Safety Standard 205 (FMVSS 205), ECE R43 and other standards recognized by the US Department of Transportation (DOT). Our tests help reduce injuries when glazing material is broken, help protect the vehicle’s structure and occupants when involved in collisions and ensure that vehicle windows have a necessary degree of transparency for driver visibility. Our goal is to ensure that the glazing materials you use sustain the different forms of strain that a vehicle encounters in its lifetime.

Three (3) 12” x 12” inch flat specimens were tested for regular (parallel) luminous transmittance at normal incidence using ICI “Illuminant A” both before and after irradiation from a source equivalent to the specified Uviarc Laboratory equipment operated as specified for 100 hours. The specimens were placed nine (9) inches from the light source and maintained at a temperature of 110 ± 3°F. After the second transmittance measurements were made, the same three irradiated specimens were immersed, vertically on edge, in water at 150°F for three minutes and then transferred to and similarly immersed in boiling water for 10 minutes. The specimens were then removed and visually inspected for delamination and clouding. Post test results indicated no discoloration or clouding, verifying sample compliance.

Three (3) 12” x 12” inch flat specimens were stored for 2 weeks in a humidity cabinet over water, at an air temperature of 120 - 130°F. Post test results did not indicate any separation or visible defects in the samples.

Three (3) 12” x 12” inch flat specimens were immersed vertically on edge in water at 150°F for three minutes and then quickly immersed in the same manner in boiling water. The specimens were then boiled for two hours. Post test results did not indicate any cracking, bubbles or visible defects.

Five (5) 12” x 12” inch specimens were separated and kept at a temperature of 70-85°F for at least 4 hours immediately preceding the test. For each test, the specimens were supported horizontally in a steel frame made in accordance with Fig.1 of the Code. A 7-ounce steel dart, made in accordance with Fig. 3 of the Code, was dropped 30 feet, once, freely and from rest, the nose of the dart striking the specimen within 1 inch of its center on the face that would be glazed to the outside of the vehicle. Post test results did not indicate any loose or detached fragments exclusive of the area punctured by the dart. The holes produced by impact of the dart were sufficiently large to permit passage of the dart’s body through the specimen. No specimens produced any large pieces when broken.

Twelve (12) 12” x 12” inch specimens were separated and kept at a temperature of 70-85° F for a minimum of 4 hours immediately preceding the test. The specimens were supported horizontally in a steel frame made in accordance with Fig. 1 of the Code. A half-pound solid, smooth, steel sphere was dropped 30 feet, once, freely and from rest, striking the specimen within 1 inch of its center on the face that would be glazed to the outside of the vehicle. The ball was allowed to make only one impact on the specimen. Post test results did not indicate any samples that broke into large pieces or developed a hole through which the ball could pass. No specimens showed signs of an area of the reinforcing material greater than 1 square inch developed on the side opposite the point of impact or total separation of glass from reinforcing material as great as 3 square inches.

Ten (10) 12” x 12” inch flat and three (3) 12” x 12” inch curved specimens were masked within 1 inch of all edges and individually placed 25 feet from the face of an illuminated box constructed in accordance with Fig. 4 of the Code. They were positioned so that the area of the specimen being examined would be nominal to the line of vision between the light source and the examiner’s eye (one eye only) and the entire unmasked area of the specimen was surveyed. Post test results did not exhibit shifting of the secondary image beyond the point of tangency with the inside edge of the circle.

Using the specified projector and screen placed 25 feet apart in a dark room and the projector focused on the screen, the same specimens that were used for the Optical Deviation test were placed individually as close to the screen as possible and moved toward the projector in steps of 5 inches and held parallel to the screen. When light and dark patches began to appear throughout the entire unmasked area of the specimens’ shadow, the distance from the screen to specimen was recorded. Post test results did not indicate any light or dark patches existing over the entire area before the specimens had to be moved a distance in excess of 25 inches from the screen.

Ten (10) 12” x 12” inch flat specimens were separated and kept at a temperature of 70-85°F for a minimum of 4 hours immediately preceding this test. The specimens were supported substantially in a horizontal position in a steel frame made in accordance with Fig.1 of the Code. A 5 pound ± 0.5 ounce solid, smooth steel sphere was dropped from a height of 12 feet, once, freely and from rest, striking the specimen at the approximate geometric center of the surface that would be glazed to the interior of the vehicle. Post test results showed that no specimens thus tested allowed the ball to pass completely through the specimen within a five second interval after impact, either by what would be described as a puncture of the specimen or fracture of the specimen into relatively large pieces that subsequently fold aside to permit passage of the ball.

The following test equipment was calibrated to testing standards: 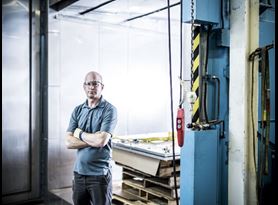 Element provides automotive glass testing services that ensure the robustness of your glazing materials for acceptance under ANSI Z26.1, FMVSS 205 and ECE R43. 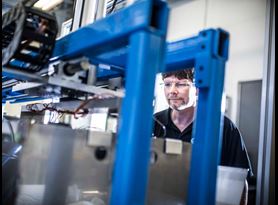 Find out more about Element's comprehensive battery testing in accordance with UN 38.3, UL 2580, IEC 60095, ECE R100, and more to help you bring safe, quality, and compliance products to market. 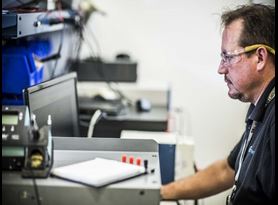 Element provides a complete suite of automotive electronics testing to the most stringent testing standards ensuring the safety and reliability of many electronic components. 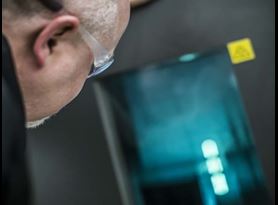 Element is at the cutting-edge of accelerated exposure testing, providing xenon arc testing to clients in the textile, polymer, paint, and automotive industries.