Digital radiography has seen increasing use in the world of non-destructive testing in recent years, of which there are two basic types: Computed Radiography (CR) and Digital Detector Array radiography (DDA), more commonly known as Digital Radiography (DR).

With ongoing technological advancements and significant cost reductions with regards to purchasing, processing, and storage of traditional film, digital systems have rapidly become the preferred choice.

Digital radiography also encompasses Computed Tomography (CT), which compiles multiple digital images to produce 3D images. Even though CT scanning has been a mainstay of medical imaging for over 40 years, it is still a relatively new application in industrial non-destructive testing.

Computed radiography is an indirect process, designed to be a replacement for traditional film radiography. A rigid or flexible cassette houses the imaging plate (IP), which facilitates their use in many applications.

Following X-ray exposure, the IP is removed from the cassette and scanned by a dedicated processor, which reads the stored latent (hidden) image, converting it into a digital image. The main advantage over traditional film is that IPs are reused hundreds, even thousands of times (depending on X-ray energy received). A scan typically takes two minutes, compared to approximately nine minutes processing of film. Image quality is comparable to film and general-ly exceeds it, especially with regards to contrast sensitivity.

IPs can be used similarly to conventional film. For example, pipe bores and flanges are radiographed as the flexible cassettes can be placed in or around complex shapes. The superior dynamic range of CR systems, coupled with the ability to enhance and manipulate the processed image (software filters), ensures reshoots are eliminated.

Digital radiography testing uses a digital detector array, also known as a flat panel detector in place of an IP or traditional film. The detector converts the X-rays either directly or indirectly into a digital image which can be ready to view almost instantly. This feature is harnessed in the field of “real-time” radiography, which is a quick but effective method of product evaluation.

Compared to CR and especially film, DR generally requires a smaller dose of radiation and thus less exposure time to attain comparable image quality. DR also has a very high dynamic range with bit-depths typically ranging from 8 to 16-bit. Images can also be manipulated and enhanced using grey-scale transforms and filters. In theory, FPDs can be used many thousands of times over many years and because there is no need for scanning or chemical processing, it offers a very efficient and cost-effective solution.

Both DR and CR modalities produce a 2D image of the object. In contrast, CT systems produce a 3D image that is created by taking multiple image ‘slices’ (usually many thousands) at different angles around a single axis of object rotation. The computer then uses complex algorithms to reconstruct the slices into a 3D form. This process is very computer-intensive and can be time-consuming. Still, the final reconstructed image can pinpoint discontinuities within an object and give a precise depth and location which 2D systems simply cannot provide.

As a rule, the main advantage digital systems have over film-based systems is image portability. Images can be easily stored or sent electronically worldwide in seconds, as they are saved as computer files in various formats as opposed to film, which is carefully stored in humidity-controlled environments – for decades in some cases.

Deciding between computed and digital radiography

There are several factors to consider when deciding which method best suits your needs. Both CR and DR systems generally require far less exposure time than film radiography. Both offer high latitude images and eliminate the reliance on chemicals for processing.

DDA applications include several small specimens placed on one 14”x17” detector, or orient-ing the detector around/inside a larger specimen. However, CR film is flexible to meet the contour of a specimen, which is not possible for DD applications.

As a DDA system does not involve a technician removing the IP (or film to be processed), it permits automation by specimen manipulation between the source and the detector. This can be applied to small and large specimens alike.

Element’s industry-leading laboratories host the latest digital radiographic testing equipment that can quickly and efficiently identify weaknesses in your materials. Our experts use this powerful non-destructive testing method in the aerospace, energy, and manufacturing sectors to make certain your products are compliant and fit for purpose.

Find out more about how our services can help you, contact our engaged experts today. 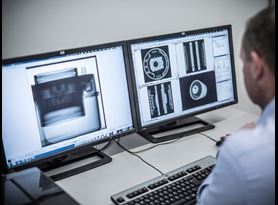 Our industry-leading laboratories host the latest digital radiographic testing equipment that can quickly and efficiently identify weaknesses in your materials. 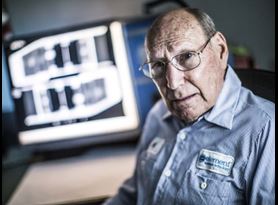 Element has the capabilities to perform conventional film radiography to Computed and Digital radiography, a highly sensitive method that produces an image in a digital format that is viewable on any laptop or computer. 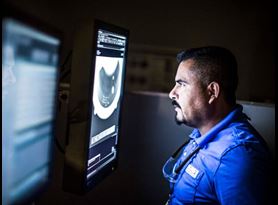 Find out about the range of NDT services Element uses to evaluate the properties of a material, parts, products, welds, or systems without materially affecting the integrity of the items being tested.

Element has invested over $3m in computed radiography equipment and training to expand its aerospace NDT testing capabilities across the UK and the USA.