Compression properties of composites are impacted by the resin and fiber resin interface, and often determine the overall design, size, and weight of a part. Composite compression testing is crucial for screening new materials and maintaining quality control.

The goal of composite compression tests is to drive compressive forces into a uniform gauge area without causing premature failure or improper failure modes in other parts of the specimen. As composite materials continue to become more advanced, obtaining a universal standard for performing compression testing has presented challenges.

The existing composite compression test methods fall into three classes, depending on how materials are loaded on the test frame: bending, shear, and end-loaded.

ASTM D5467 and ASTM D7249 document two of the most common bending test methods for compressive properties of composites.

When constructing the specimen, spans, core material, thickness, and adhesives are selected to ensure that the correct failure mode (compression facing) is achieved. Strain gauges on the compressive face are used to measure modulus, Poisson’s ratio, and strain to failure.

Some methods apply a shear load to the gauge area of the specimen. One of the first methods, commonly called Celanese compression, loads the sample through wedges that are gripped by a cone-shaped fixture. The specimens are rectangular and usually tabbed. Celanese compression was initially referred to in the ASTM D3410 standard but has since been removed. The Celanese specimens were generally limited to 0.25” in width by the ASTM Standard and 10mm by ISO 14126.  The overall length is 5.5 inches with a 0.5” unsupported length.

Though Celanese compression is generally considered obsolete, it is sometimes requested to compare to historical data. For this method, material thickness is a critical consideration and must be within the narrow range specified, which allows proper seating of the wedges with the cones.

The current version of ASTM D3410 is commonly called the IITRI method, which was developed to mitigate some of the weaknesses in the Celanese method. The IITRI fixture is large and heavy, which presents challenges when used at extreme temperatures. Specimens used for this method may be up to 1 inch wide and 5.5 inches long with 0.5 inches of unsupported length. The wedges are loading through a rectangular seat, so the overall thickness of the specimen is not as critical as in the Celanese method. However, the material within the gauge area must be thick enough to preclude Euler buckling. Most data users agree that the test provides a compressive stress result because of the significant unsupported length in the material.

Plastics have traditionally been tested using the end loading methods described in ASTM D695. This method allows for the end-loading of a prism that is square or round in cross-section. A dog-bone shaped flat specimen may also be used and is loaded in a side support fixture that precludes buckling.

The Suppliers of Advanced Composites Materials Association, SACMA, adopted and formalized an industry practice of using tabbed specimens with a 0.188-inch gauge length. The samples generally result in a higher apparent compressive strength because of the shorter gauge length. Since all these specimens are end-loaded, the ends must be flat and parallel for relevant results. If the specimens fail or broom at the ends, the results should be considered invalid.

Additionally, if the level of torque applied to the bolts that secure specimen to the fixture is too high, test results may be invalid. Due to the short gauge length and the variability of friction from the side support fixture, further standardization of this method has been slow.

Continued fixture development resulted in a combined loading compression fixture. ASTM D6641 describes the appropriate fixture and test method.
Like the earlier methods, the nominal specimen is 5.5 inches long with a 0.5 inch of unsupported length. By clamping the ends of the fixture between square ends, the specimen is loaded with a combination of end and shear loading.

The combined loading compression fixture is smaller and easier to use than the IITRI fixture. Carefully torquing the fixture bolts to an even, specified level is essential. Specimens are strain gauged with back-to-back gauges to monitor for Euler buckling. The percent bending is reported with the test data and may be used to troubleshoot anomalous data.

For composite design, values for compression with a hole to simulate a stress riser is often needed. ASTM D6484 is such a method for obtaining those values.

Composite compression testing methods vary by fixture design, loading techniques, and specimen size. While there is no set standard for testing the compressive strength of composites, our experts can help you select the test methods that will generate the required result. Element works diligently to make certain your composite materials are fit for purpose. If you require composite compression testing or have questions about which methods are right for your material, please contact us today.

Find out how Element helps its customers to develop, test and qualify their composite materials to ensure that these complex, cutting-edge materials are safe, quality, compliant and ultimately fit for purpose. 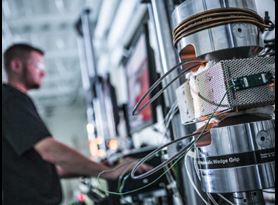 Find out how Element applies its unique combination of experience and the financial investments we have made so far, to develop leading edge and repeatable testing protocols for CMCs in the Aerospace sector. 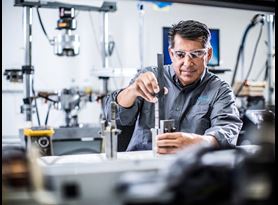 Find out more about how Element’s polymer experts can put your non-metallic materials to the test through mechanical, chemical, analytical and environmental testing. 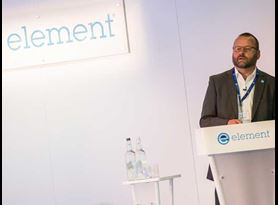